My current active work (with blogs and commentaries sometimes appearing in chronology ahead of the technical paper, but if that last has an abstract, an introduction, and some sections complete, then it headlines here): 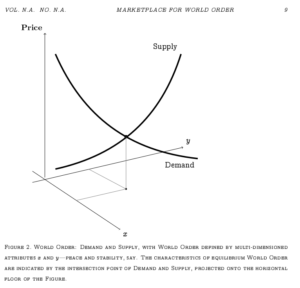 A Marketplace for World Order

I’m writing a book A Marketplace Approach to World Order, my attempt to organize the different things on which I’ve been writing and speaking. The book builds on the papers above and the work described below.

What follows next are my elevator pitches on projects that will be part of the monograph.

This animation shows the dynamics of international trading networks (in a “hub-and-spoke”, or weighted bipartite network) around the US in the 1980s and 1990s, and then, in a data-driven way, the emergence of China’s centrality after WTO accession. US centrality has diminished sharply since 2000; the rise of China’s centrality comes together with the growth of ASEAN as modern trading nations.

In the animation, trading partners are indicated by 2-digit ISO codes; the length between the US and another node is inversely proportional to the essentiality of trade with the US to the node. Similarly, for China as incipient and then important hub. The more tightly clustered around the US (or China) is the collection of nodes, the more essential is the US (or China) to its network of trading partners.

The size of the tight blue circle around the US denotes the US’s centrality. Centrality is the weighted sum of that hub’s ties with its network. The more central is the US in its network of trading partners, the larger is its tight blue circle. Similarly, China.

Where is the World’s Tightest Cluster of People, that is, the smallest circle on our 3-dimensional planet that includes at least 50% of the world’s population? In 2015 that was the circle 3300km in great-circle radius centred near Mong Khet in Shan State, Myanmar, on the border with China. 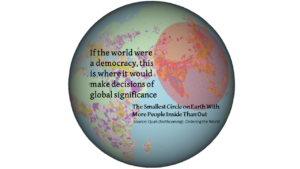 “If the world were a democracy, this is where it would make decisions of global significance.”