This landing page is just to direct you to the collections for which you might be seeking. A curated selection appears further below.

I write here about different subjects, but more and more, against a background of the global economy continuing to shift from west to far east, the writings show a distinct focus on the economics of world order and Asia, and on how the Pacific Century is taking shape.

[The listings here are distinct from my CV (or its non-English Appendix).]

Almost all my online writings are in English. It is there that 99% of my traffic goes after coming here.

But with the help of friends and students at NUS, LSE, and PKU I have a small (but I hope growing) collection of writings in 中文.  I also maintain background notes on the data I use and my software programming here.

Frequent brief items will appear on my Facebook wall or on my Mastodon, LinkedIn, and Instagram feeds instead. More technical, conventional writings are listed on my Github.io, automatically git-updated from my local (offline) machines.

If you prefer receiving items – whether complete listings or just a heads-up – on email, I also operate a light-volume mailing list

The curated selection below is that that I most frequently update:

Dec 2016 “The Geopolitics of Populism” (with Kishore Mahbubani) Project Syndicate

Sep 2016 “There Are Many Reasons Why Development Must Not Fail”

Aug 2016 “How America Might Yet Prove LKY Wrong: Why Offshore Balancing is Economically Sensible But Can Do Even Better” Global Policy

May 2016 “An Economic Perspective on the International System: Demand, Supply, and a Rational World Order” Global Policy

04 February 2016 “Why is AIIB Interesting in Fukuyama’s War of Models?”

19 August 2015 “How China’s Rise is Revealing the Cracks in US Claims to Legitimacy as Global Leader”,South China Morning Post

15 Nov 2014 “Convergence Determines Governance – Within and Without” Brookings, November 2014

23 July 2014 “How We Choose Our Political Leaders Tells the World a Lot About Us”. Democratic Audit, July 2014 (“如何选择全球领袖：美国主导的单极世界vs.国际公务员机制,” Guancha Syndicate, 20 October 2014) 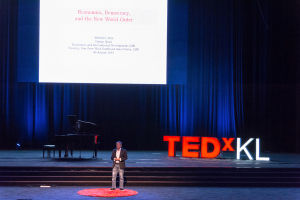 (If that youtube link doesn’t work for you – because you’re behind some GFW, say – try this.  But please go to Youtube first.)