My public lectures (or similar events) are available online, among them: 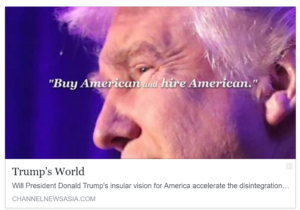 07 Nov 2016 TPP? Or OBOR? Superpower Grand Strategy and International Economic Ambition. In the public eye, superpower grand strategy has grown irretrievably intertwined with large-scale international economic arrangements. Perhaps the largest of these latter are the US-driven “Trans Pacific Partnership”, on the one hand, and China’s “One Belt, One Road” strategy, on the other. Most of the time the international community views these to be visions in competition with each other; now and then they are viewed as potentially complementary. In the ambitions that each promises, nations across Southeast Asia will be profoundly transformed over the coming decades, with the promise of improved livelihoods for all, and the possibility of stability and security across not just Asia but the world.

What is the reality on offer in these economic arrangements? How do they square with the public perception of superpower grand strategy? How should national public policies respond to the challenges raised in these international ambitions? (With Ambassador Kirk Wagar, US Ambassador to Singapore, and Kishore Mahbubani, Dean of the Lee Kuan Yew School of Public Policy, NUS). LKYSCH 5-Views 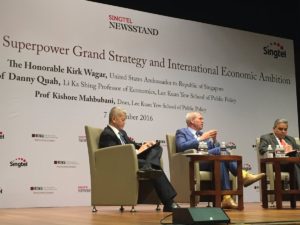 08 Oct 2016 Liberal Promise, Liberal Delusion Once, we trusted the world had wise custodians, those the rest of us could respect, admire, and emulate. Those guardians gave us ideas on how we too could succeed if we followed the examples they had set: Big bold yet simple ideas on personal freedoms, rugged individualism, unbounded liberties. But the world is not straightforward like that. Economic and political life is full of tradeoffs. 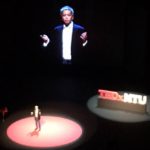 02 Sep 2016 The Liberalisation Delusion Openness, globalization, and liberalism are in retreat. Liberal democracies, long critical of others they considered mere autocracies, today confront policy pressures so intense that some have heavy-handedly closed in on themselves. What went wrong? Did political openness over-promise? Did the divide between democracy and autocracy sensibly distinguish alternate pathways to economic and political success? Is the era over on an international system that allowed hundreds of millions of the world’s poorest to become dignified agents of their own destiny?

My one message:
There are many ways, not just one, to have your society succeed. It is all our duty to be thoughtful and critical, to debate, and to watch closely and monitor what happens in the politics and economics around us. But don’t be bound by the idea of there being just one formula, liberalisation or otherwise, that your society become a successful one.

Recorded at the Lee Kuan Yew School of Public Policy, Fri 02 Sep 2016
30 Aug 2016 Challenges to Globalisation: Brexit and Trump Globalisation has contributed to the well-being of humanity for over half a century. It has helped pull out of extreme poverty hundreds of millions of the very poorest on our planet; it has helped the most wretched of humanity become dignified agents of their own destiny. But is the flame of international exchange and mobility now dead in the West, and what will that do to the rest of the world? (with Prof Kishore Mahbubani, Dean of the Lee Kuan Yew School of Public Policy)

Recorded at the Lee Kuan Yew School of Public Policy, Tue 30 Aug 2016
13 May 2015 American Decline: Global Power in the 21st Century Is America in decline? Where now the age of US unipolarity? What narrative will carry world leadership in the 21st century? (with Profs ME Cox and Peter Trubowitz of the International Relations Department at LSE)

09 August 2014 Economics, Democracy, and the New World Order Parts of our current global system carry hypocritical and damaging inconsistencies. While the TransAtlantic Axis seeks to disseminate democratic ideals throughout the world, today’s system of global governance built on US benevolent hegemony is itself deeply undemocratic.

06 June 2012 Global tensions from a Rising East Will the East slow before it counts? Is the East only big enough to be culpable but not mature enough to be responsible?